A Media Access Control (MAC) address is a 48-bit (6 bytes) address that is used for communication between two hosts in an Ethernet environment. It is a hardware address, which means that it is stored in the firmware of the network card.

Every network card manufacturer gets a universally unique 3-byte code called the Organizationally Unique Identifier (OUI). Manufacturers agree to give all NICs a MAC address that begins with the assigned OUI. The manufacturer then assigns a unique value for the last 3 bytes, which ensures that every MAC address is globaly unique.

MAC addresses are usually written in the form of 12 hexadecimal digits. For example, consider the following MAC address:

How to find out your own MAC address?

If you are using Windows, start the Command Prompt (Start – Programs – Accessories – Command Prompt). Type the ipconfig/all command and you should see a field called Physical Address under the Ethernet adapter settings: 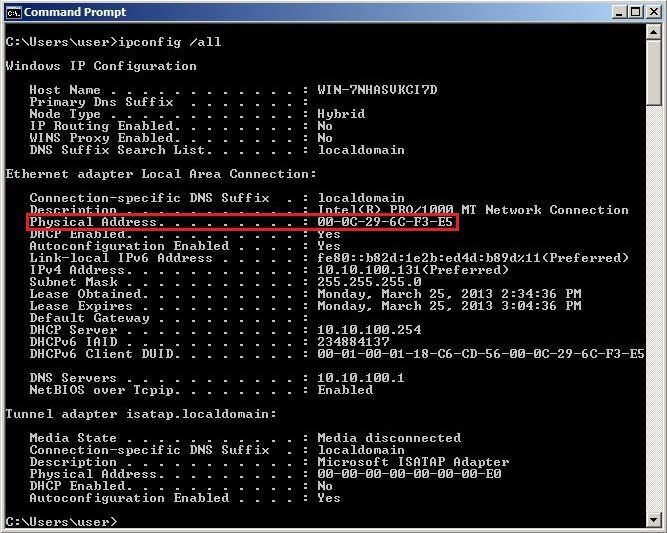 If you are using Linux, type the ifconfig command. You should see your MAC address referred to as HWaddress.

An IP address is a 32-bit number that identifies a host on a network. Each device that wants to communicate with other devices on a TCP/IP network needs to have an IP address configured. For example, in order to access the Internet, your computer will need to have an IP address assigned (usually obtained by your router from the ISP).

In contrast to MAC address, an IP address is a logical address. It can be configured manually or it can be obtained from a DHCP server.

NOTE
The term IP address is usually used for IPv4, which is the fourth version of the IP protocol. A newer version exists, IPv6, and uses 128-bit addressing.

There are three ranges of addresses that can be used in a private network (e.g. your home LAN). These addresses are not routable through the Internet.

How to find out your IP address

If you are using Windows, start the Command Prompt (Start – Programs – Accessories – Command Prompt). Enter the ipconfig command. You should see a field called IP Address:

Enter ifconfig. You should see a field called inet addr: