The first command, router eigrp ASN_NUMBER, enables EIGRP on a router. ASN_NUMBER represents an autonomous system number and has to be the same on all routers running EIGRP, otherwise routers won’t become neighbors. The second command, network SUBNET, enables EIGRP on selected interfaces and specifies which networks will be advertised. By default, the network command takes a classful network number as the parameter.

To illustrate a configuration of EIGRP, we will use the following network:

The network depicted above consists of only two routers. Each router has a directly connected subnet that needs to be advertised through EIGRP. Here is the EIGRP configuration on R1 and R2:

You can verify that routers have become neighbors by using the show ip eigrp neighbors command on either router:

The command above lists all EIGRP neighbors. The address field lists the neighboring router RID (router ID). The interface field shows on which local interface the neighbor relationship has been formed.

You can verify that routes are indeed being exchanged by using the show ip route command on both routers:

NOTE
The D character at the beginning of a line in a routing table indicates that the route has been learned via EIGRP.

By default, the network command uses a classful network as the parameter. All interfaces inside that classful network will participate in the EIGRP process.To enable EIGRP only on specific interfaces, a wildcard mask can be used. The syntax of the command is:

By using the command show ip protocols, you can verify that only the network 10.0.0.0/24 is included in  EIGRP: 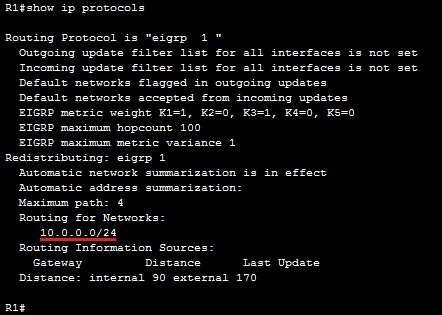