IOS (Internetwork Operating System) is a multitasking operating system used on most Cisco routers and switches. IOS has a command-line interface with the predetermined number of multiple-word commands. This operating system is used to configure routing, switching, internetworking and other features supported by a Cisco device.

Below you can see how IOS looks like when a Cisco device is started for the first time: 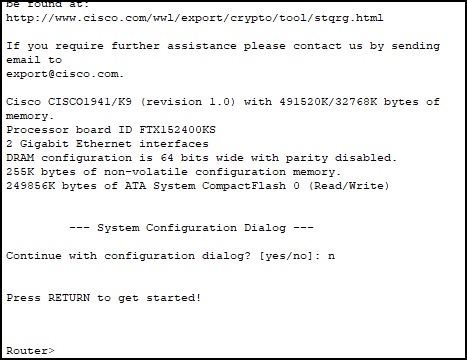 There are three most common ways to access the IOS:

1. Console access – this type of access is usually used to configure newly acquired devices. These devices usually don’t have an IP address configured, and therefore can not be accessed through the network. Most of the Cisco devices have a physical console port. This port can be connected to a computer using a rollover cable, a special type of cable with pins on one end reversed on the other end of the cable. The rollover cable is a serial cable, which means that you can’t just plug it in an Ethernet port on your computer. You will need an adapter that converts an interface on your computer (usually a 9-pin serial interface) into RJ-45.

2. Telnet access – this type of access used to be a common way to access network devices. Telnet is an terminal emulation program that enables you to access IOS through the network and configure the device remotely. The device that is being configured needs to have an Telnet server installed and an IP address configured.

Telnet uses a well known TCP port 23. One of the biggest disadvantages of this protocol is that is sends all data as clear-text, which includes the passwords! This is the reason why this type of access is usually not used anymore. Instead, SSH is usually used.

Let’s describe each of the modes mentioned above in more detail.