A brief intro of the Linux files permission

By default, Linux grants the write permission to the owner and group only.

To learn the Linux file permission in detail, you can check this tutorial.

Why htdocs folder is not writeable

Since the folder htdocs is also created during the installation, it is also owned by the user root.
By default, Linux doesn’t add any member in user’s primary group. Thus, both owner and group owner of the htdocs folder is the user root.

To verify it, we can use the following command.

As explained above, by default Linux grants the write permission to the owner and owner’s primary group members only.
This makes the folder htdocs unwritable for all users except the user root.

Let’s take some examples. Login from a regular user account and create a file and a directory in this folder.

As expected, permission has been denied in both cases.

Let’s do one more testing. This time, open this folder from the GUI console and create a new file or folder in the opened folder. 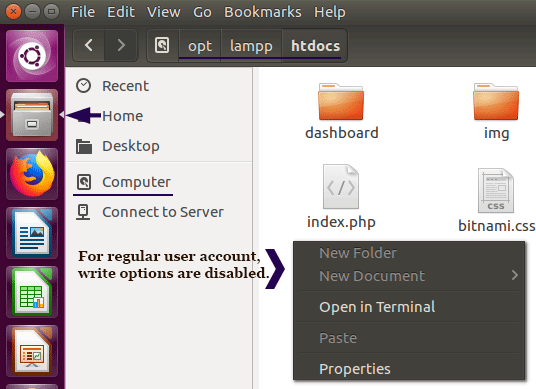 As we can see in above figure, just like command prompt, user is not allowed to create a new file or folder in this folder.

To fix this issue, we have two options; grant the write permission to all users or change the ownership of this folder. Let’s understand both options.

Granting the write permission to all users

To grant the write permission to all users, use the following command.

This command sets the full permission for all users on the htdocs folder and all of its contents. This permission applies only on the existing files and directories. Any new file or directory that will be created after this command will get the default permission.

To test it, make a new directory again.

As we can see in above output, users are now allowed to create the file and folders in the htdocs folder.

Although granting the write permission to all users is the easiest fix of this issue, still it should not be used. This option solves one problem at the cost of several other security related problems.

Unless your system is not connected with network and you are only the user who uses the system you should not use this method. To set the default file permission back, use the following command.

In order to change the ownership, first we need the username and primary group name of the new user. To know these, we can the following commands.

First command prints the username of current user while second command shows the primary group name of the current user.

Once we know the both names, we can use the following command to change the both types of ownership.

First and third commands are optional. They are used only to view the owner name before and after the change.

That’s all for this tutorial. If you like this tutorial, please don’t forget to share it through your favorite social network.