This tutorial explains how to make the cross-over cable and straight-through cable in detail with picture examples.
Learn how the UTP cable transfers data between two nodes or end devices.

Before we learn how to make a straight-through or cross-cable, let\’s understand how the UTP cable transfers the data.

How does the UTP cable work?

In UTP cable, electronic signals are used to transmit and receive the data. A UTP cable connects two nodes.
In data transmission, one node sends data and another node receives that data. NIC of the sender node converts data stream
into the electronic signals and places them into the copper wire of the UTP cable. NIC of the receiver node reads those signals
from the wire and converts back them into the data stream.

Let’s understand this process in a little bit more detail.

Electronic signals or electric currents flow in a circuit. In an electric circuit, two wires are used. The first
wire is used to carry the electrons or current from the source to the load. The second wire is used to complete the circuit
between the load and the source. When electrons or current passes through the load, the load performs its functions.

Let’s take a simple example. Suppose we have an LED bulb, two wires, and a battery. To light this bulb, we connect it from
the battery using the wires. We connect the positive side and negative side of the battery to the bulb separately.
The following image shows this example. 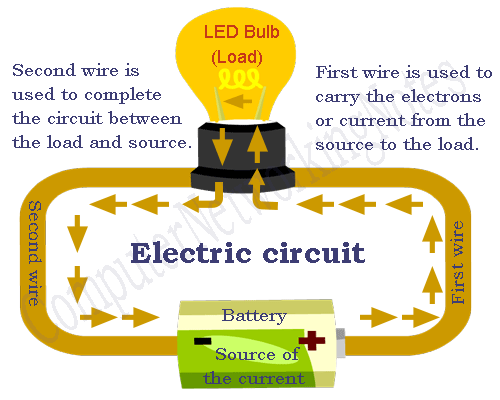 The same mechanism is used in UTP cable to transfer the data. Two wires of a UTP cable create an electric circuit between nodes.

The following image shows how the electric circuit builds between the sender and receiver nodes.

End devices, usually PCs or Server, store and process data in digital or binary format.
To transfer binary data through the electric circuit, NICs of both sender and receiver nodes use an encoding scheme.

An encoding scheme is a language that both NICs understand. In the encoding scheme, the
sender node changes the electrical signal over time, while the receiver node interprets those changes as binary data.

The following image shows how both nodes create and use their circuits to transfer the data. 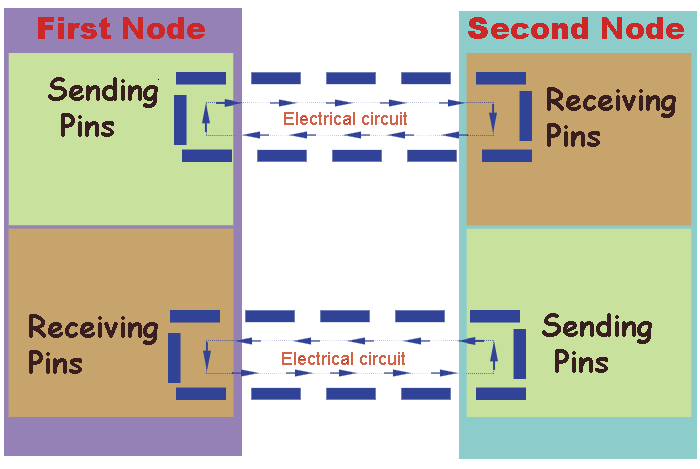 A UTP cable contains 8 wires. These wires are grouped in four pairs. Each pair consist of two twisted wires.
The first wire has a single color-coded plastic coating while the other wire has that color plus white color striped plastic coating.
For example, for the brown wire pair, one wire’s coating is all brown, while the other wire’s coating is brown-and-white striped.

Why are the wires twisted?

Both NIC and switch port have an eight pins slot. To connect these pins with the wires of a UTP cable,
a connector known as the RJ-45 connector is used. The RJ-45 connector has eight physical locations, known as pin positions or simply pins,
into which the eight wires of the UTP cable can be inserted. These pins create a place where the ends of the copper wires can touch the pins
of NIC or switch port. 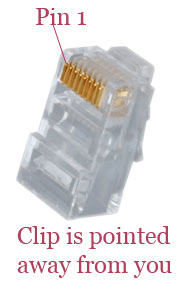 Let’s understand how to make both types of cable in detail.

The following table lists the wire positions of the straight-through cable on both sides.

A straight-through cable is used to connect the following devices. 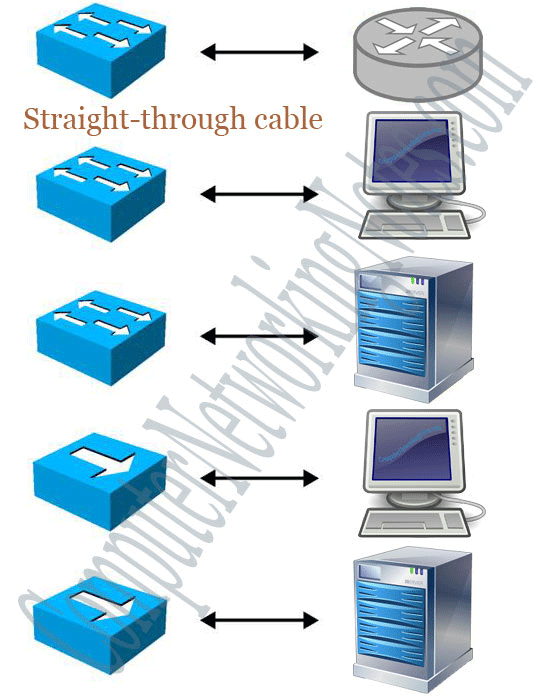 In this cable, transmitting pins of one side connect with the receiving pins of the other side.

The following table lists the wire positions of the cross-over cable on both sides.

The cross-over cable is used to connect the following devices. 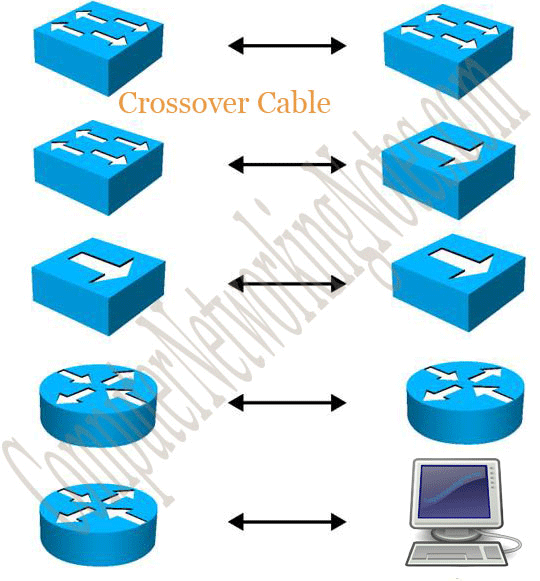 That’s all for this tutorial. If you like this tutorial, please don’t forget to share it with friends through your favorite social platform.

Filed under: CCNA Study Guide,Miscellaneous - @ 6:02 am