This tutorial explains the differences between the RIPv1 and RIPv2 routing protocols. Learn what RIP timers are and how they are used by the RIP protocol to perform its basic operations.

RIPv2 was developed in the 90s as an enhancement of the RIPv1. To make RIP more suitable for modern networks, in RIPv2 not only many functions of RIPv1 were improved but many new features were also added.

To understand which functions were improved and which features were newly added, in the following section, we will compare RIPv1 and RIPv2 routing protocols.

This tutorial is the third part of the article \”How to configure RIP routing protocol explained with features and functions of the RIP protocol \”. The previous parts of this article are the following.

This is the first part of the article. This part explains how the RIP routing protocol uses broadcast messages to exchange network paths\’ information.

This is the second part of the article. This part explains the concept of distance-vector routing and how the RIP routing protocol uses this concept.

To find and select a single best route for each IP subnet of the network, both versions use the hops-count metric. The maximum hops count limit is set to 15 on both versions.

RIPv1 does not support any type of authentication while RIPv2 supports MD5 authentication. In RIPv2, we can restrict what routers we want to participate in.

The following images show an example of these timers. 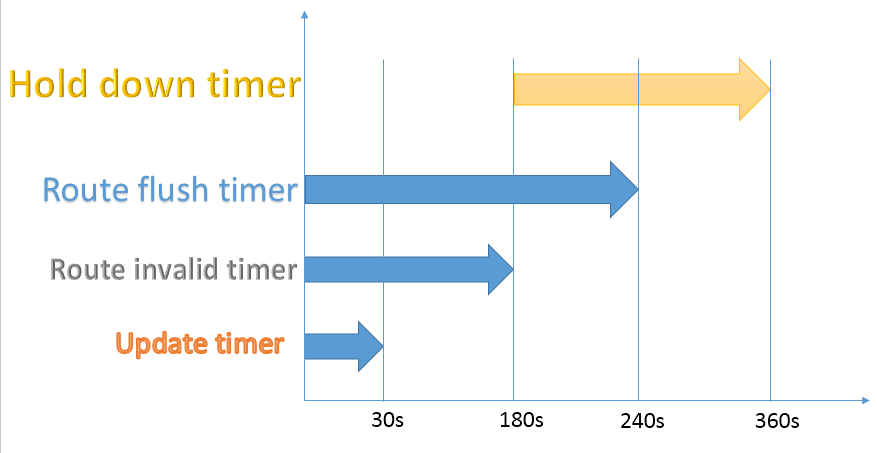 Let\’s understand each timer in detail

RIP learns new routes from the received routing update. After learning new routes, when RIP adds them to the routing table, it also adds an invalid timer with each route. RIP uses this timer to get rid of routes that become invalid in the future.

In upcoming routing updates, if RIP receives the same information on a route, it resets the invalid timer of that route in the routing table. If RIP does not receive the same information on a route in 180 seconds, it assumes that the route is no longer available. When this happens, RIP sends an update to all its neighbors to indicate that the route is invalid.

RIP uses this timer to quickly identify invalid routes. When RIP receives a routing update that contains information about an invalid route, the RIP immediately starts the hold-down timer for that route in the routing table. The default value of the hold timer is 180 seconds.

That\’s all for this tutorial. In the next part of this tutorial, we will understand the split-horizon and route poisoning features of the RIP protocol. If you like this tutorial, please don\’t forget to share it with friends through your favorite social network.