This tutorial explains grep command options, search patterns and regular expressions in detail
with practical examples. Learn how grep command search a specified string in a specified location along with grep syntax, and regex.

Let\’s understand each parameter in detail.

Options are used to modify the default behavior of a command. If options are not used, command works normally.
If options are used, it works according to the options. To understand it practically, let\’s take the above example again.

In above example, we searched the keyword \”user\” in file \”user-data\”. Since we did not specify any option,
command worked normally and printed all lines which contain the text string \”user\”.

Now suppose, we want to print all lines which do not contain the text string \”user\” from
the file \”user-data\”. For this, we can use following command.

Noticed, its the same command which we used above except the
option -v. The option –v instructs grep command to exclude all the lines
which contain the specified search pattern.

A regular expression is a search pattern that the grep command matches in specified file or in specified location.
A pattern can be any text string such as single character, multiple characters, single word, multiple words or a sentence.
It is also known as pattern search, pattern matching, regex or regexp.

To specify a search pattern, we can use two types of characters; literal characters and Meta characters.

Special meanings of Meta characters are tool or command specific. The grep command uses Meta characters to
customize the search pattern. Other command may use these for other purpose or for the same purpose.

The grep command can search in any source that contains text such as single text file, multiple files, single directory,
multiple directories, output of other command, an archive, a zip file, etc.

To search in files and directories, you can specify their absolute or relative path. For example,
a user rick wants to search the word jhon in the file userdata which is available in his home directory. He can use any one of following commands.

For example, a user wants to know whether a file named salary exists or not in a directory named database.
The database directory contains more than 1000 files. In this case, he can use the ls command with grep command as following.

In order to understand the grep command options and regular expressions practically,
let\’s create a practice lab with some dummy files and directories. This lab is optional.
If you are familiar with grep command, you can skip this lab. The grep command does not change anything itself. It only prints the search result. You can safely use it with existing file system.

If possible, create and use this lab. It not only allows you to practice with grep command in test environment but also helps you in understanding how to use the regular expressions with grep command practically.

Create a directory named \”rhcelab\”. In this directory, create a file named userdata with some dummy user records. 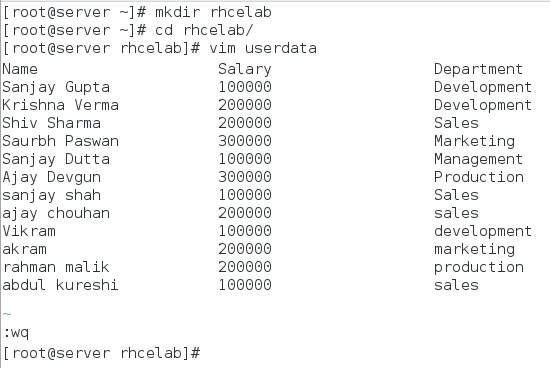 Create a directory named \”scriptdir\” and move in it. Create a simple script file named userprofile by redirecting the
output of .bash_profile and .bashrc files. Both files are available in user\’s home directory. 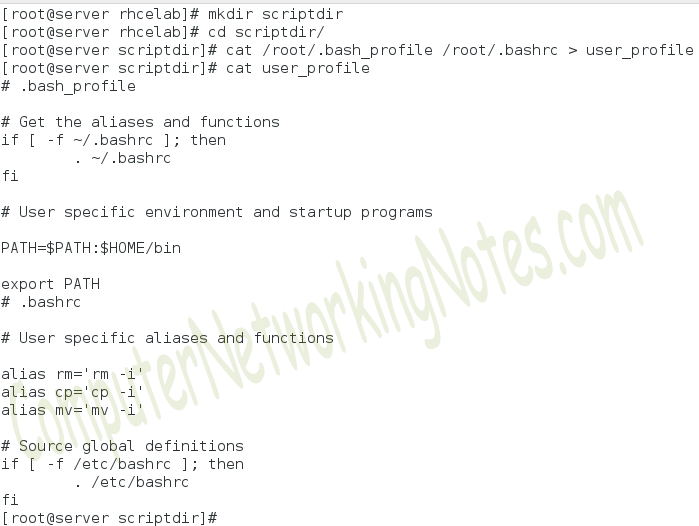 Create a directory named \”html\” and move in it. Copy the /usr/share/doc/HTML/en-us/index.html file in it. 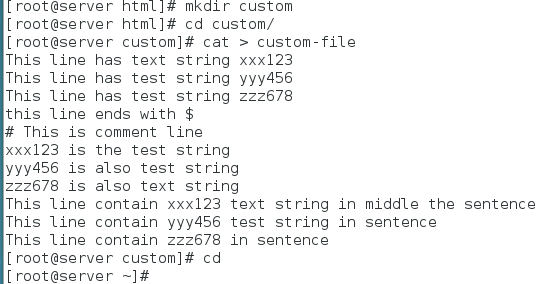 That\’s all setup we need for practice. Now let\’s take some examples to know how grep command searches the specified string.

For example, to print all lines which contain the word Sanjay from the file userdata, you can use following command.

Check whether a specific group exists in system or not

Group database is stored in the file /etc/group. To figure out whether a particular group exist or not, we can use following command

If grep displays group\’s record, it exists otherwise it doesn\’t exist. Let\’s take an example.
Check whether the group nfsuser and the group sambauser exist in system or not.

As we can see in above output, group nfsuser exists and group sambauser does not exist.

Check whether a particular user exists in system or not

Just like group, we can also check whether a user exist in system or not with grep command.
User database is stored in /etc/passwd file. To figure out whether a particular user exist or not, we can use following command

If grep displays user\’s record, it exists otherwise it doesn\’t exist. Let\’s figure out, whether the user sanjay and john exist or not.

As we can see in above output, user sanjay exists while user john does not exist.

This tutorial is the first part of the article \”grep command in Linux explained with options and regular expressions\”. Other parts of this article are following.

This tutorial is the second part of the article. It explains how to use options with grep command in detail with practical examples.

This tutorial is the third part of the article. It explains how to use regular expressions with grep command in detail with practical examples.

This tutorial is the fourth part of the article. It explains how to use extended regular expressions with grep command in detail with practical examples.

That\’s all for this introductory part. In next part, I will explain how to use options with grep command. If you like this tutorial, please don\’t forget to share it with friends through your favorite social channel.