Which type of command should I use to create a text file?

Creating a large text file for testing from the regular text editor is only a waste of time. For example, suppose, you need a 1GB text file to test an archive utility. If you create this file from the regular text editor, you may have to spend more than one hour in adding, creating, and copying the useless text in this file. But, if you use a system text manipulating command, you can create this file in less than a minute.

In the below section, we will understand how to use the system text manipulating commands to create files of any size for testing and debugging purposes.

Creating a large text file of the specific size

To create a large text file of the specific size, we can use the dd command.
The dd command takes four arguments; source, destination, block-size, and counter.
It reads the source and copies the contents of the source on the destination.

It uses the following syntax.

Through the block-size and counter, we can specify how many times should the dd command performs the read
and store operation. This command accepts the block-size in bytes.

To use any unit in block-size, convert that unit in bytes.

By default to measure the data and display the file size, Linux uses units of the binary system.

Once a unit is converted in bytes, use the counter to get the specific size of the file.

The following table lists some examples of how to specify the file size accurately.

Let\’s take some practical examples to understand it more clearly.

The following image shows a few more examples of the dd command with ouput. 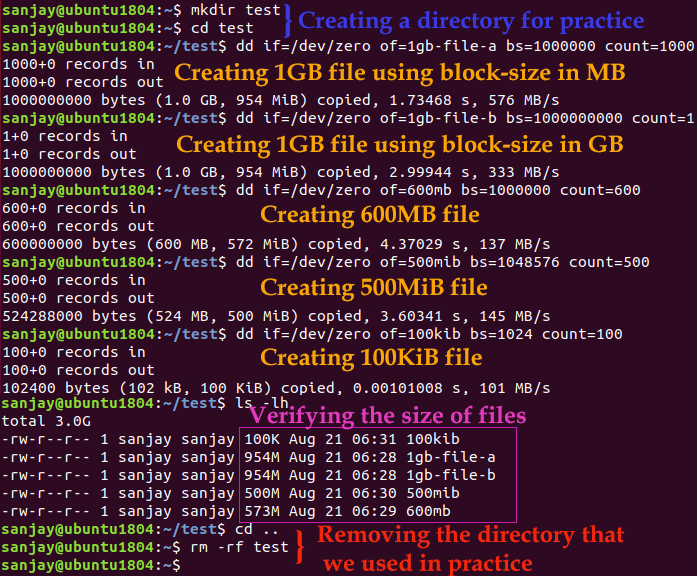 To use this approach, use the following syntax.

For example, the following command stores the string \”this is a test line\” in the file named test-file until
the size of the test-file does not become equal to the 100KB.

The head command accepts file size in both units; binary and decimal. You can use any unit, which you like.
To use the decimal unit, use the B suffix. For example, KB, MB, GB, TB, etc.

The following image shows a few more examples of this approach with output. 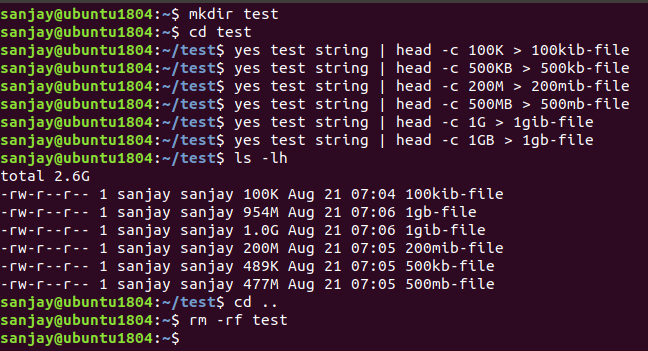 The differences between both commands are the following.

The fallocate command allocates all of the space to the file without writing a single byte of data in the file.
It means, if you use the fallocate command to create a 20GB file, you will get a file that consumes 20GB actual disk space but contains no data.

Generating files from the fallocate command and the truncate command.

To generate a file from the fallocate command, use the following syntax.

The following image shows a few more examples of the fallocate command. 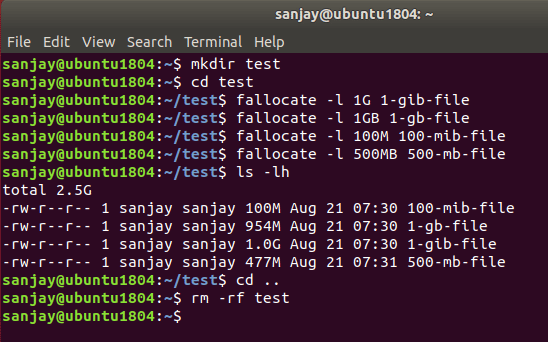 To generate a sparse file from the truncate command, use the following syntax.

The following image shows a few more examples of the truncate command. 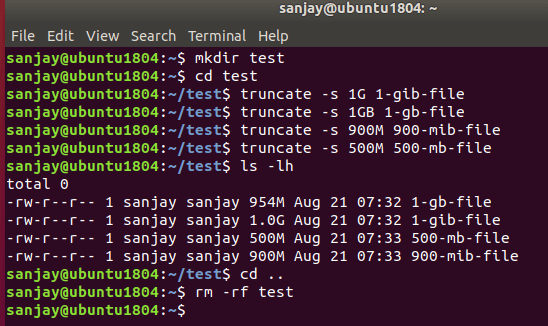 The following image shows an example of the touch command with the output.

That\’s all for this tutorial. If you like this tutorial, please don\’t forget to share it with friends through your favorite social channel.