Features and characteristics of EIGRP

This tutorial is first part of our article “EIGRP Routing protocol Explained with examples\”. You can read other parts of this article here.

This is the second part of this article. In this part we will explain how two routers become EIGRP neighbor and maintain this neighborship. In order to become an EIGRP neighbor, three essential configuration values must be matched. This part explains these values with neighborship building process in detail with example.

This is the third part of this article. EIGRP uses composite metric calculation formula to calculate the best path. Bandwidth, reliability, delay, load and MTU are the components of formula. In this part we will explain these components with formula in easy language with examples.

This is the last part of this article. EIGRP is a classless protocol wearing classful mask. Unless we configure it properly it acts like classful protocol. In this part we will learn how to configure EIGRP routing protocol properly. At the end of this article we will include most commonly used EIGRP commands with descriptions.

From introduction to till the preparation of this tutorial, EIGRP is ruling the world of routing protocols. The only negative about EIGRP was Cisco kept this protocol as proprietary protocol. In order to run this protocol, we had to buy all routers from Cisco. This thing was changed a little in 2013 when partial functionality of EIGRP was converted in open standard. Now we can also buy routers from other vendors along with Cisco, still running EIGRP on all routers.

Since EIGRP is hybrid protocol, it has advantages of both link state and distance vector protocol. It uses composite metric calculation formula to select the best route for destination. It sends partial or full update only when something is change in network. It maintains three tables for ultra-fast convergence.

EIGRP uses this table to store all routes which it learned from neighbors. It contains a list of all destinations and routes advertised by neighboring routers. EIGRP selects single best route for each destination from this list. That route goes in routing table. Remaining routes are marked as backup routes. EIGRP refers selected route as Successor and backup route as Feasible Successor. EIGRP uses separate topology table for each routed protocol.

EIGRP stores single best (Successor) route for each destination in this table. Router uses this table to forward the packet. There is a separate routing table for each routed protocol.

PDMs are the special feature of EIGPR. Through these modules EIGRP supports multiple network layer protocols. It maintains separate tables for separate routed (Network Layer) protocols. For example if you are using both (IPv4 and IPv6) versions of IP protocol, it will maintain separate IPv4/EIGRP and IPv6/EIGRP tables.

EIGRP uses metric to select the best route from all available routes for destination. Metric has five components.

From these only bandwidth and delay are by default enabled.

EIGRP uses RTP to communicate with other EIGRP speaking routers. RTP (Reliable Transport Protocol) uses multicast and unicast to exchange the data with neighbors. It uses class D address 224.0.0.10 for multicast. It keeps track of each multicast it sends out. EIGRP maintains a list of the neighbors who have replied. If it doesn’t receive a reply from any neighbor, RTP will resend the same data using unicast. It will make 16 unicast attempts before declaring neighbor is dead.

DUAL uses topology table along with RTP to accomplish above tasks in minimal time. As we know EIGRP maintain a copy of all routes including neighbors in topology table, so it would be the first place to look for an alternative route in a route failure situation. If EIGRP does not find an alternative here, it will ask neighbors for help. If neighbors have any updates about asked route, they will reply back with that information. This strong mechanism allows DUAL to find and maintain the best routes for destination speedily.

Redistribution is used to exchange the route information between different ASes. When a route is learned through the redistribution, it has higher AD value than its original source. For example EIGRP has two AD values 90 for interior EIGRP and 170 for exterior EIGRP. Exterior EIGRP means EIGRP instance which has different AS number. 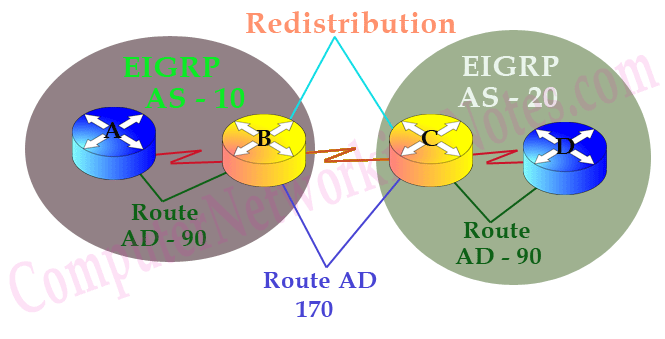 In a complex network, we may have multiple routing protocols running simultaneously. Different routing protocols use different metrics to calculate the best path for destination. In this situation router may receive different routes information for a single destination network. Routers use AD value to select the best path among these routes. Lower ad value has more trustworthiness.

Let’s understand it with a simple example; a router learned two different paths for 20.0.0.0/8 network from EIGRP Interior and EIGRP Exterior. Which one should it select?

Answer of this question is hidden in above table. Check the AD value of both protocols. Administrative distance is the believability of routing protocols. Routers measure each route source on a scale of 0 to 255. 0 is the best route. 255 is the worst, router will never use the route learned by this source. In our question we have two protocols EIGRP Interior and EIGRP Exterior. EIGRP Interior has lower AD value than EIGRP Exterior. So its route will be selected for routing table.

That’s all for this part. In this introductory part we covered basic terminology used in EIGRP routing protocol. In next parts of this article we will explain these terms in more detail with examples.