EIGRP uses four components out of five to calculate the routing metric.

This tutorial is third part of our article \”EIGRP Routing Protocol Explained with examples\”. You can read other parts of this article here.

This is the first part of this article. In this part we explained basic concepts of EIGRP such as Features and characteristics of EIGRP, Neighbor Table, Topology Table, Routing Table, Protocol Dependent Modules, Metric, RTP, DUAL, Autonomous System and Administrative Distance.

This is the second part of this article. In this part we explained how two routers become EIGRP neighbor and maintain this neighborship. In order to become an EIGRP neighbor, three essential configuration values must be matched. This part explains these values with neighborship building process in detail with example.

This is the last part of this article. EIGRP is a classless protocol wearing classful mask. Unless we configure it properly it acts like a classful protocol. In this part we will learn how to configure EIGRP routing protocol properly. At the end of this article we will include most commonly used EIGRP commands with descriptions.

Bandwidth is a static value. It will change only when we make some physical (layer1) changes in route such as changing cable or upgrading link types. EIGPR picks lowest bandwidth from all outing going interfaces of route to the destination network.

For example have a look on following figure. 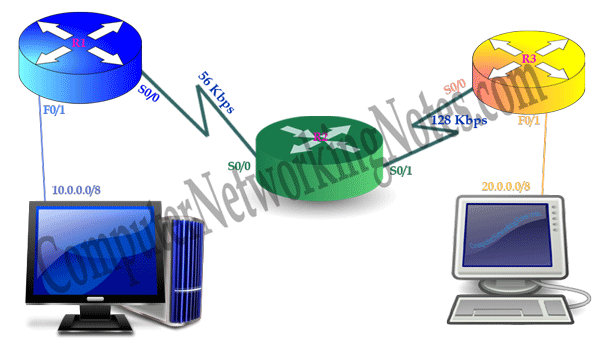 We have two serial links. One has 56Kbps bandwidth and other has 128Kbps. So which one will be selected?

Among these bandwidths EIGRP will pick 56Kbps for composite metric calculation formula.

You may surprise why it picks the lowest instead of the highest? Well picking the highest bandwidth doesn’t give us a surety of equivalent bandwidth throughout the route. It’s a maximum cap which means we will get its equivalent or lower bandwidth in this route.

While picking the lowest bandwidth gives us a guarantee of equivalent of higher bandwidth throughout the route. Since this is the bottleneck of route.

For example have a look on following network 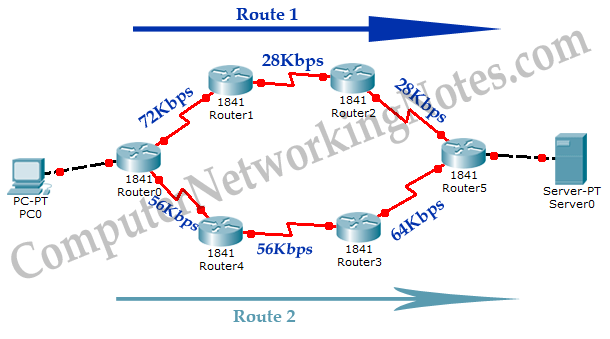 With this comparison Route1 will be selected.

With this comparison Route2 will be selected.

Looking at lowest bandwidth gives us the actual idea of route.

Next logical question is how EIGRP determine the bandwidth?

When we enable an interface, router automatically assign a bandwidth value to it based on its type.
For example serial interface has a default bandwidth value of 1544Kbps. Until we change this value
with bandwidth command, it will be used where it is required.

Then what purpose does this command solve?

This command is only used to influence the routing protocol which uses bandwidth in route selection process such as EIGRP and OSPF.

Suppose we have two routes for single destination; Route1 and Route2. For some reason we want to take Route1 instead of Route2. How will we influence default metric calculation to select the Route1?

Download this example topology and load in packet tracer. 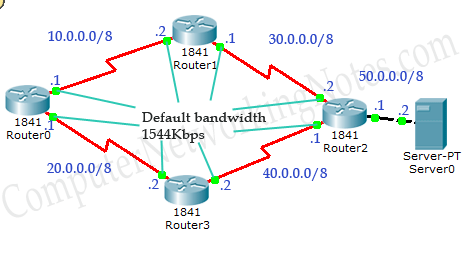 EIGRP is configured on all routers and all links have default bandwidth. 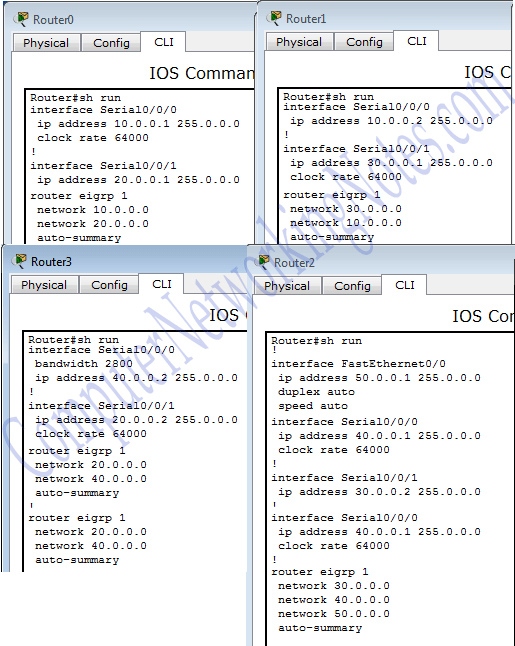 Both routes are load balanced with equal cost value 2684416. 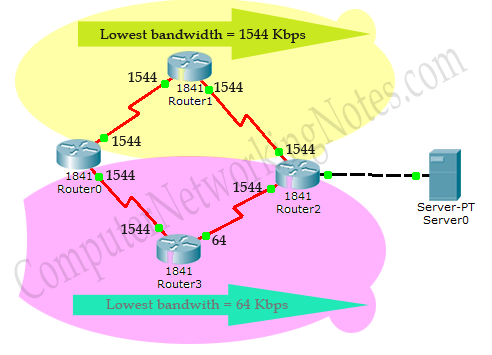 Now Route1 has the higher lowest bandwidth so it would be selected. 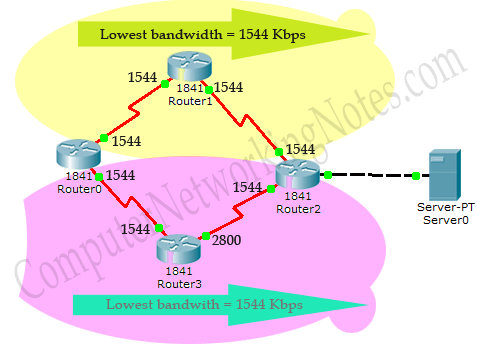 Both routes have equal lowest bandwidth. They will be load balanced.

Here I have question for you.

Why EIGRP load balanced between Route1 and Route2 while now Route2 has better bandwidth?

Because EIGRP uses the lowest bandwidth of route to calculate the path cost and that is still 1544Kbps.

If K2 is enabled, maximum Txload value will be used in composite metric calculation formula.

Delay reflects the time taken by a packet in crossing the interface.
It is measured in fractions of seconds. Like as bandwidth Cisco has implicit delay values for all
interfaces based on the type of interface hardware. For example a FastEthernet has
default delay of 100 microseconds. Since it is a static value, we can override it with delay command.

Default delay value or value set by delay command has nothing to do with the
actual delay caused by interface. Just like bandwidth, this value is also an influencer.

It is expressed in terms of tens of microseconds. To define a delay of 1000 microseconds,
we need to configure 100(1000/10) on interface. Output of show interface command will automatically multiply it with ten before displaying.

EIGRP is an enhanced distance vector routing protocol. It also uses route poisoning, withdrawing route, split horizon and poisoned reverse for loop free optimized network. For all these mentioned techniques EIGRP use the maximum delay as the indication of the unreachable route. To denote the unreachable route EIGRP uses the delay of 16,777,215 tens of the microseconds.

Reliability is expressed as the fraction of 255. 255 expresses 100% reliability while 0 represents 0% reliability. If K4 is enabled in metric calculation formula, it will use minimal reliability.

At first glance this formula looks like a complicated equation. But it is not as difficult as it sound. Let’s make it easier.

By default EIGRP does not use dynamic values in metric. This will disable two more components; load (K2) and reliability (K4).

BandwidthE = 107/ least bandwidth of route [Lowest bandwidth from all interfaces between source and destination. Use interface default bandwidth wherever bandwidth is not set through the bandwidth command]

ValueE = cumulative delay of route [Sum of all outgoing interface’s delay. Use interface default delay, if not set through the delay command]

Putting these configuration values will make formula to look like this

Before we move further, let me explain why EIGRP keeps dynamic values disable by default.

Dynamic values change over the time. Enabling dynamic values will force EIGRP routers to calculate metric all the time and send updates each other just because the load or reliability of an interface has changed. This will create serious performance issue. To avoid such a situation EIGRP only enables static values for metric calculation.

If we only enable static values for metric calculation, EIGRP will not recalculate the metric unless it changed. Static values change only when a physical change occurred in network such as an interface is down or router is dead. This will keep EIGRP nice and clean.

Let’s see this formula in action. Earlier in this tutorial we used an example topology to explain the bandwidth component. Load that topology in packet tracer and run show ip route eigrp command from privilege mode. We have four routes for three destination networks. One destination network has two routes.

For this destination network metric cost is 2681856. Before we learn how this cost was calculated,
we need to understand some key points associated with formula.

We have three serial interfaces between source and destination. So our first step is to find out the value of bandwidth and delay.

We can use show interface command to know the values. 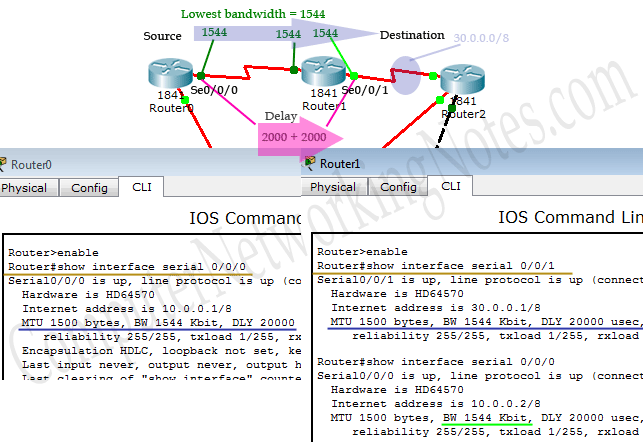 All interfaces have equal bandwidth so our least bandwidth would be 1544Kbps.

As I said “Any decimal value will be rounded back to the nearest integer before performing the rest of the formula.”

Before solving rest of the formula, convert decimal value back in positive integer.

Great! We have revealed the cost calculation method. Let’s do this calculation again for next route.

For this route we have lowest bandwidth 1544Kbps and cumulative delay of 4000(ten of microseconds). 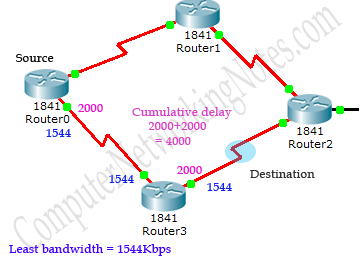 Let’s put these values in our formula

Fine, now we have only route left. Let’s figure out its cost also.

For this destination we have two routes. Both routes have equal least bandwidth and cumulative delay. So naturally their cost will also be same. As we know EIGRP automatically load balance equal cost routes and these routes have equal cost. So they both make their way to routing table. 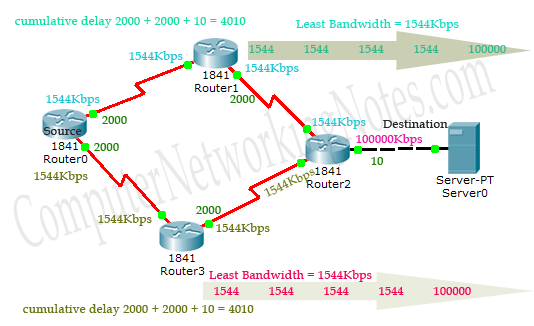 This is how EIGRP calculates the route cost. In job life you will rarely need to calculate the route cost manually. Still I suggest you to spend a little extra time in learning this process especially if you are a Cisco exam candidate.

That’s all for this part. In next part I will explain how to configure EIGRP step by step with examples.