Computers are devices powered by electricity, which has two discrete states: On or Off.

Define the patterns of bytes

Coding schemes, such as ASCII, EBCDIC, and Unicode, provide the means to interact with a computer

When a letter is pressed on a keyboard, the electronic signals are converted into binary form and stored into memory.

The computer processes the data as bytes of information and converts them to the letters we see on the monitor screen or on a printed page. 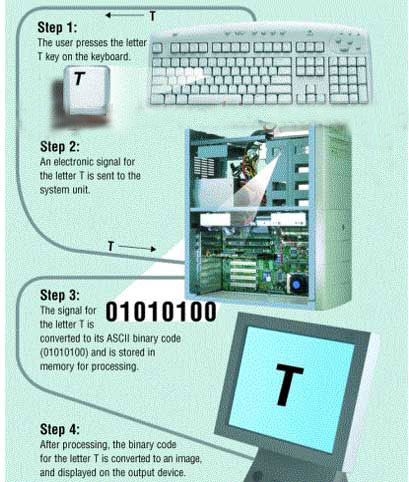 The System Unit houses the central processing unit, memory modules, expansion slots, and electronic circuitry as well as expansion cards that are all attached to the motherboard; along with disk drives, a fan or fans to keep it cool, and the power supply.

All other devices (monitor, keyboard, mouse, etc., are linked either directly or indirectly into the system unit. 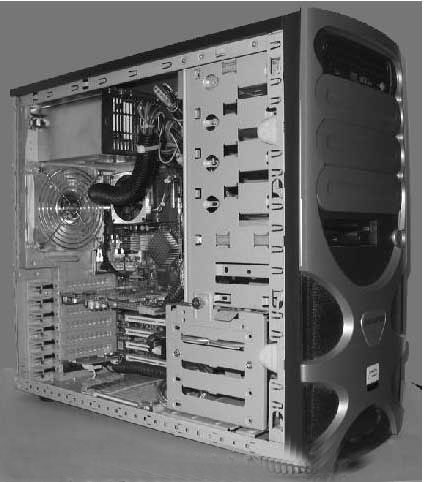 Front of the System Unit

Drives are housed in drive bays which are accessed at the front of the case.

Internal drives, such as the hard disk drive, are installed in internal bays that are not typically as accessible as the external drives pictured here. 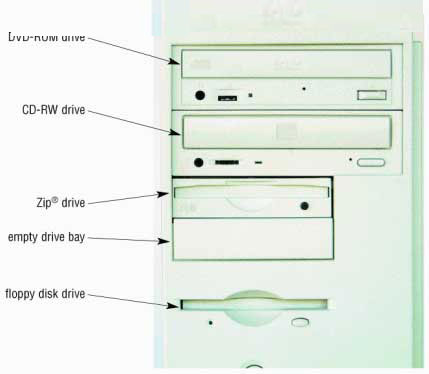 System Unit cases come in a huge array of types and styles, depending upon hardware needs. 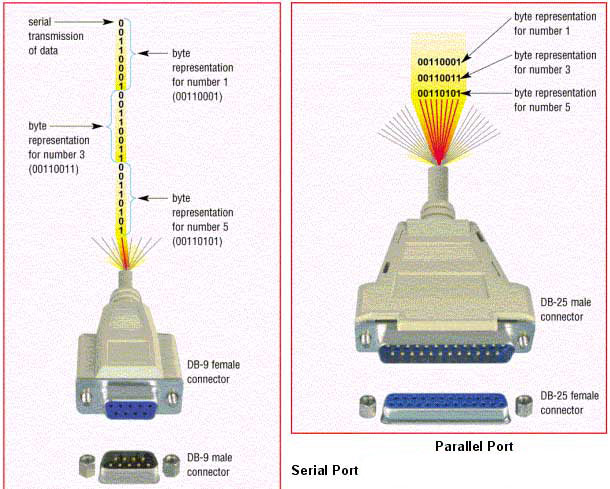 transmit data one bit at a time, like the picture on the left illustrates.

transmit more than one byte at a time.

These types of port designs are based on whether or not fast data transmission rates are required by the device or not.

Most computers come with basic types of ports (serial, parallel, keyboard, mouse, and USB); and expansion cards allow you to expand the available types needed by specific devices. 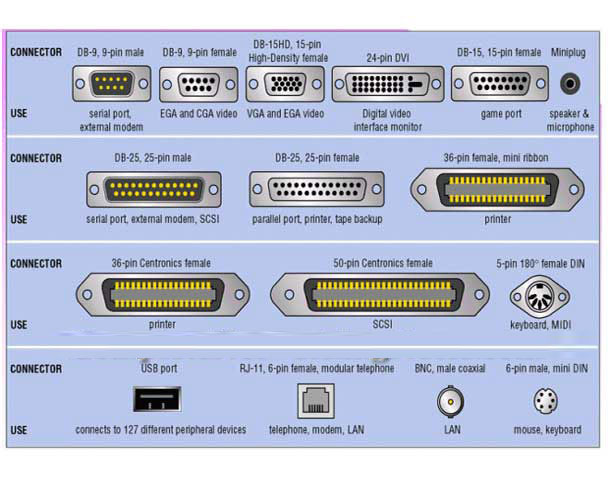 Understanding the differences among connector types is useful and important, as the cable required to attach a device to your computer is specific to its connector, not to mention the port on the computer.

Many other forms
Memory Stick, MultiMediaCard, CompactFlash, and SmartMedia

accept data or commands in a form useable by computers

in system unit and are comprised of circuitry.

Drives read from and write to storage media (the physical material that can store data and programs).

provide connections between computers and communication networks, allowing for exchange of information and data with other computers via transmission media such as cables, telephone lines, and satellites 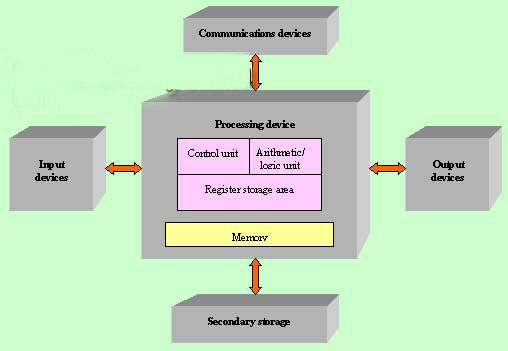 Resolution
refers to the number of dots displayed in the X (across) and Y (down) co-ordinates.
expressed in terms of horizontal pixels X vertical pixels.
Typical screens are capable of displaying 640×480 dots

Dot Pitch
measurement of how close together the pixels, or phosphor dots, are that make up an image.
The smaller the dot pitch, the crisper the image,0.31 or less provides a sharp image, especially when displaying text.

Refresh rate
the vertical frequency, or the rate at which each pixel on a screen is re-drawn. A low refresh rate results in an image that flickers, resulting in eye-strain.
A refresh rate of 60Hz means the images is redrawn 60 times a second. Typical refresh rates are 60Hz, 72Hz and 75Hz.

Display graphics – Visual output from your system.
Works between the system\’s processor and monitor
Relays the information received from the programs and applications running on the system to the monitor

VDAs come with their own memory chips (RAM or VRAM for video RAM) which determines how fast the card processes images, the resolution, and how many colours it can display.
VDA embody certain standards.
Todays PCs commonly use VGA and SVGA standards

Disadvantages : Noisy! Print quality lower in some types. Poor graphics or none at all.

Dot matrix printers form characters using row(s) of pins, 9, 18, or 24 which impact the ribbon on top of the paper.

Daisy wheel printers use a spoked wheel with characters placed at the end of each spoke. A print hammer is used to strike the desired character onto the ink ribbon and then the paper.

General features print head does not make contact with the paper

The three main types of non-impact printers are laserjet, inkjet and thermal

Speed: The speed of a printer is measured in: cps= characters per second, lpm= lines per minute ppm= pages per minute The faster the printing, the more expensive the printer.

Resolution: A more numerical measure of print quality is printer resolution. Measured in dots per inch (dpi), this determines how smooth a diagonal line the printer can produce.

Parallel Cables- send data 8 bits at a time. Distance from PC 50 ft.- Most popular – USB cable which has a maximum data transfer speed of 12 megabits/s (1.5 MBYTES/s).

The motherboard is the main circuit board of a computer. It contains the central processing unit (CPU), the Basic Input/Output System (BIOS), memory, mass storage interfaces, serial and parallel ports, expansion slots, and all the controllers for standard peripheral devices like the keyboard, disk drive and display screen.

The chipset and other motherboard circuitry are the \”smarts\” of the motherboard. Their job is to direct traffic and control the flow of information inside the computer.

The chipset is a critical part of any computer, because it plays a big role in determining what sorts of features the computer can support. 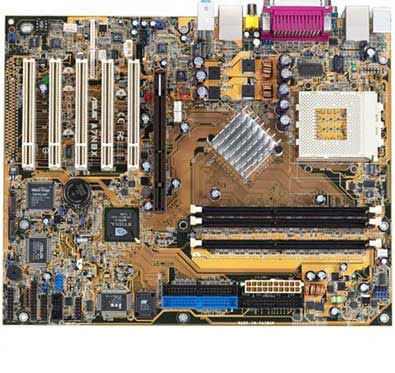 FROM -Flash ROM is reprogrammable memory using normal voltage inside the PC- You can upgrade the logic capabilities by simply downloading new software. This saves the expense of replacing circuit boards and chips. 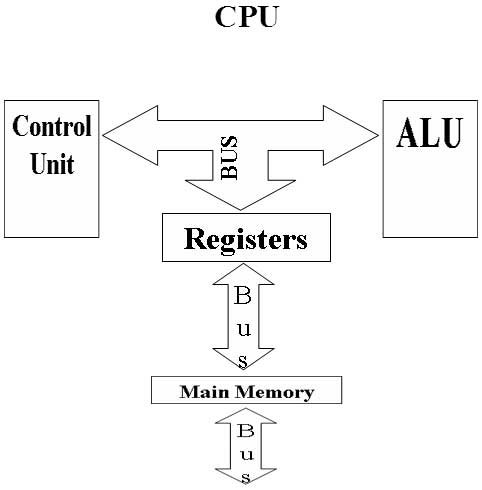 It is a small, high-speed memory area that is placed between the processor and the system memory.

The value of the cache is that it is much faster than normal system memory.

The most frequently used instructions are kept in cache memory so that the CPU can look in there first – allows the CPU to run faster because it doesn\’t have to take time to swap instructions in and out of main memory.

Large, complex programs such as complex spreadsheets or database management programs benefit the most from having a cache memory available. Pentium II processors generally come with at least 512 KB of cache memory. 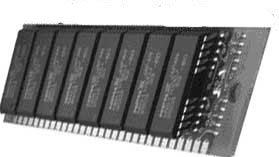 Most computers today use DRAM, which are also of two types:

Most desktops and notebooks use one of the three most popular types of synchronous dynamic random access memory (SDRAM) for the main system memory. Single data rate (SDR) SDRAM is the older type of memory, commonly used in computers prior to 2002. Double data rate (DDR) SDRAM hit the mainstream computer market around 2002, and DDR2-based systems hit the market in mid-2004.

DDR SDRAM is a straightforward evolution from SDR SDRAM. The big difference between DDR SDRAM and SDR SDRAM is that DDR reads data on both the rising and falling edges of the clock signal, so the DDR module can transfer data twice as fast as SDR SDRAM.

While DDR has a limited clock rate, the evolutionary changes to DDR architecture enable DDR2 to achieve speeds beyond of DDR, delivering bandwidth of 5.3 GB per second and beyond! Because DDR2 is able to operate with faster bus speeds, your memory doesn\’t hold back the performance of your processor.

Generally speaking, motherboards are built to support only one type of memory. You cannot mix and match SDRAM, DDR, or DDR2 memory on the same motherboard in any system. They will not function and will not even fit in the same.

Why is RAM so important?

Aside from the processor, the two most important factors affecting a PC\’s performance are RAM and hard disk capacity.

Hard disks are typically huge, so the primary limiting factor is the amount of installed RAM.

Without enough RAM, the operating system must swap out storage space with the hard disk. The OS creates a Paging File (swap file) to supplement RAM (workspace). This is Virtual Memory.

Virtual memory is inherently slow! RAM speed can typically be 120,000 times FASTER than the hard disk so the less you must rely on virtual memory (swapping files between RAM and hard disk), the faster your system will perform.