This tutorial explains how to compress and decompress files in Linux along with the similarities and differences between gzip and bzip2 commands. Learn how to use the gzip, bzip2, gunzip and bunzip2 commands in Linux with practical examples.

A compressed file not only uses less disk space but also consumes less memory and network bandwidth when moved to another location. Linux contains several compression utilities. Among those, this tutorial discusses two most popular utilities; gzip and bzip2.

Similarities between gzip and bzip2

Both commands not only works in similar fashion but also use similar syntax and options to compress and decompress the files. For example, the gzip command uses following syntax.

Just like the above syntax, the bzip2 command uses following syntax.

As we can see in above table: –

Besides command line options, there are few more differences between both commands. Following table lists those differences.

This tutorial is the first part of the article \”Compressing and archiving explained in Linux\”. This tutorial explains following RHCSA/RHCE topic.

Other parts of this article are following.

This tutorial is the second part of the article. It explains basic usages of tar command with syntax and options.

This tutorial is the last part of the article. It explains how to use the tar command in Linux with practical examples.

Although both gzip and bzip2 commands use fairly simple and straightforward options,
still if you forget any option or have any confusion about any option, you can list all supported options with the -h option.

To list all supported options of gzip command, use following command 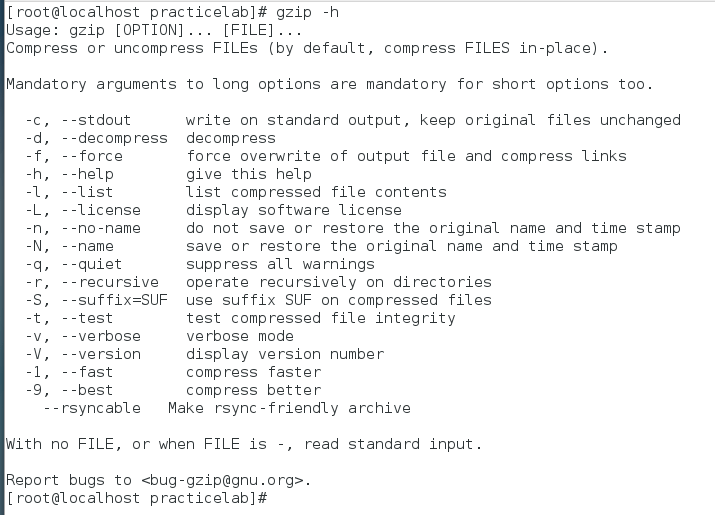 To list all supported options of gzip command, use following command 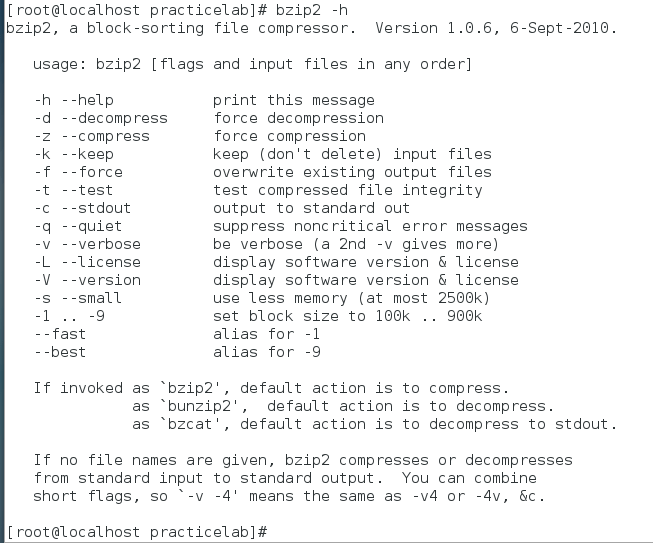 To decompress the file file_a.gz, we can use any one command from following commands. 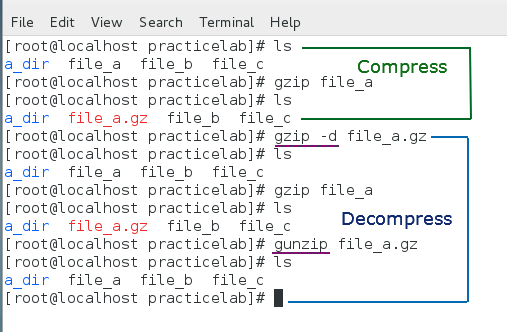 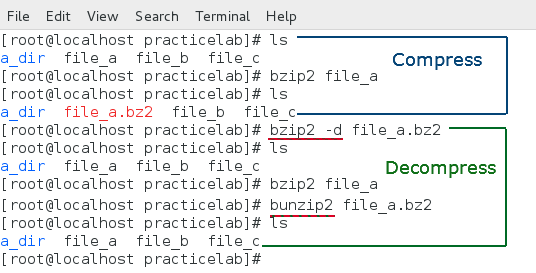 The bzip2 provides higher compression ratio but take more time in compression.
To verify it practically, let’s compress a file with both commands and compare the file size of compressed file. 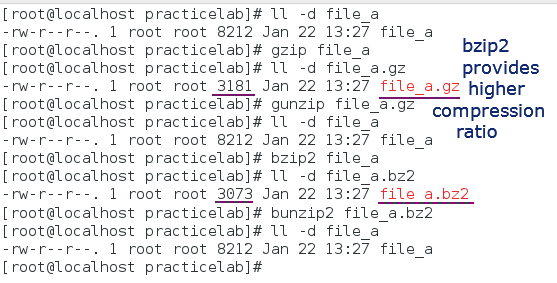 It clearly shows that bzip2 provides more compression ratio than the gzip. If you need more proof, you can perform the same compression with -v option.

Redirecting output to a device or file

If require, we can store output to any device, file or custom location.
To send the output at custom location, the option –c is used. The option -c forces command to
send output at standard output device (console) and keeps the original file intact.

Following figure shows an example. In this example, a small file is created and gzip command with option -c is used to compress it.

As we can see in above figure, if option -c is used, command writes output to the console.

We can use shell redirector (>) to store output in custom location.
For example, following command compresses two files; small-file and small-file-2 in supplied sequence and
writes the output to a new file small.gz.

You can also use this feature to create a single compressed file from multiple files.

Getting information from a compressed file

The gzip command, if used with -l option, scans the supplied compressed file and lists following information about that file.

This option only work with gzip command. The bzip2 doesn’t support this option.

We can also use this option with gunzip command to decompress all files form a directory and all of its sub-directories recursively. 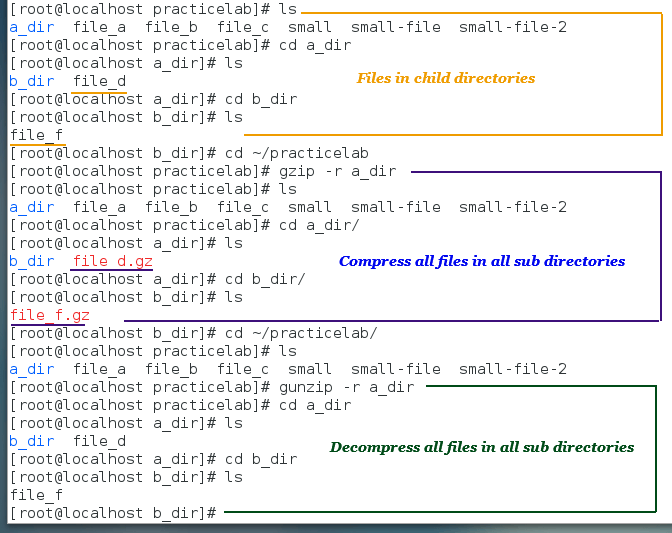 The bzip2 command neither supports this option nor provides any other option for recursive operation.

This option only works with bzip2 command. The gzip command does not support this option.

Create a compressed file with bzip2 and open it with a text editor. Add an extra line and save it.
Now as, it contains text in both formats; compressed and decompressed, bzip2 treats it as a corrupt compressed file.

To repair this file, we can use bzip2recover tool. Once file is repaired, it can be decompressed with the bzip2. 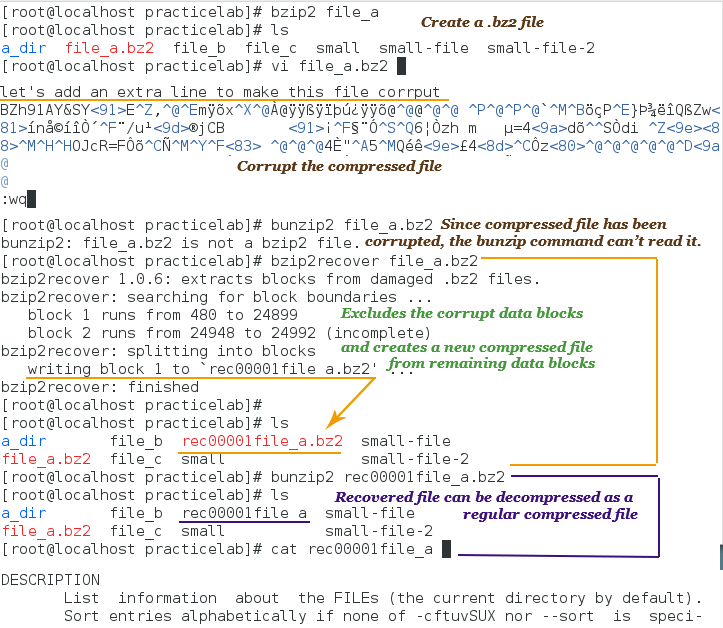 The bzip2recover tool works only with bzip2 compression. A file that is compressed with any other utility or tool can’t be repaired with it.

Default value is 6. To use any other value, specify that value as option.

Following figure shows, how changing this value can impact the compression ratio. 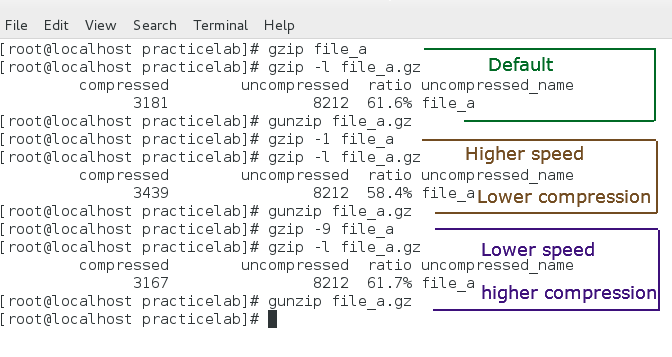 Although it’s a waste of time and space, but if require, you can compress an already compressed file again with -f option. 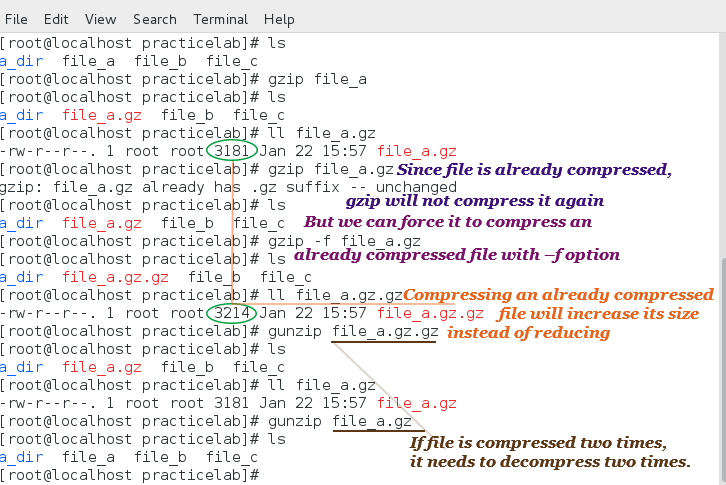 That’s all for this tutorial. If you like this tutorial, please don’t forget to share it with friends through your favorite social channel.